Equipment of digital transmission systems of television and sound broadcasting

TECHNICAL DESCRIPTION for digital transmission systems of television and audio broadcasting, the use of which is possible as part of the radio relay system (RRS) "Era M", and in various configurations of Studio equipment of TV and radio companies.

1.   Name and completeness of  communications means

Digital transmission systems for television and sound broadcasting include the following equipment:

Encoders (video encoders) with MPEG-4 and /or MPEG-2 compression:

2.   Purpose of the communications means and their functions

2.1.1.   Multiplexers-modulators for satellite systems are designed to combine up to 8 ASI input digital streams into an IP stream and its modulation by QPSK and 8 PSK methods for video signals transmission over RRL (if output signal tuning on frequency in the range from 70 -1,700 MHz) and broadcasting to the satellite (DVB-S/S2 standards). Multiplexers-modulators provide operation with both SD (Standard Definition) and HD (High Definition) channels.

2.1.2.   Multiplexers-modulators for cable systems are intended to combine up to 8 ASI input digital streams into an IP stream and its modulationt by QAM 32/64/128/256 methods to distribute it across cable systems. Up to 4 DVB-C packages are available in the group spectrum. They opertate with both SD (Standard Definition) and HD (High Definition) channels.

Receivers-decoders have the following interfaces:

Video encoders have the following interfaces:

This article combines 2 functions - an MPEG4/MPEG2 encoder with HDMI, SDI, CVBS inputs, and a transcoder 1 program in the transport stream.

The choice of one of the 2 functions is carried out by switching in the control program. Transcoding can be done from MPEG2 to MPEG4 or from MPEG4 to MPEG2. The peculiarity of the encoder (transcoder) is the possibility to receive a transcoded (encoded) program at the output of ASI and IP streams consisting of 2 channels.

One channel with HD or SD resolution and the other one with low resolution 320x240 or 320x180. This allows you to simultaneously use the second channel for broadcasting to mobile devices or the Internet.

Currently, there is a lack of content in cable networks with the technical possibility of broadcasting a large number of TV channels. A hundreds of channels can be placed in digital DVB - C networks, but interesting programs for viewers are many times less.

The proposed time shift device allows you to give the cable network three copies of any channel, delayed in time with a given step (Time Shifting), that is, the channel can be viewed at any time. The selection of the TV channel to be duplicated in time is made from the ASI input stream through a specialized program included in the delivery.

This equipment has the following interfaces:

The on-camera wireless system is intended to transmit video signals together with audio in digital form in the ranges of 762-818 MHz and 2,300-2,700 MHz from a professional video camera to a mobile television station. The system operates on one of 8 fixed frequencies and provides transmission of one video and audio channel.

3.2. The parameters of the ASI-asynchronous serial interface are given in Table 2

3.3.   The parameters of the SDI-serial interface of the digital TV signal in the component representation of YCRCB are given in table 3.

TV signal parameters meet the requirements given below:

In terms of the requirements for the IP packet transmission Protocol, the equipment complies with the requirements given in Annex No. 1 to Order No. 144 of 06.12.2007 "On approval of the regulations on the use of information packet switching and routing equipment".

4.  Conditions of use on the public communication network

Digital transmission systems of television and audio broadcasting are used to operate on the communication networks of the Russian Federation and meet the requirements:

5.   Diagrams for connection  to the public communication network are given in Figure 1. 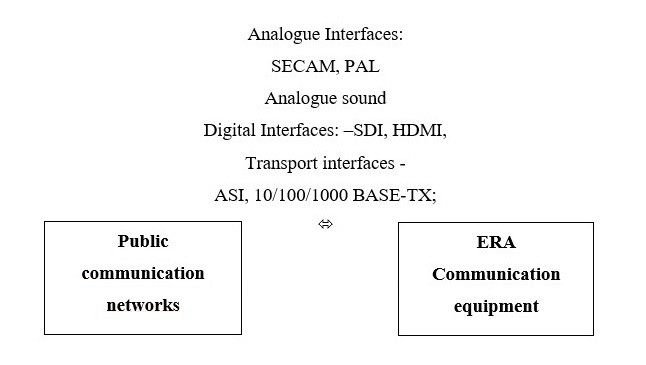 The equipment operates at ambient temperature from +5 0C to +40 0C.

The equipment must not have mechanical resonance and must comply with all requirements after exposure to sinusoidal vibration in the OFF state for 90 min. with an acceleration amplitude of 4g in the frequency range of 5-80 Hz.

6.3. Power Supply of the Equipment

The parameters of the equipment comply with the requirements given in this document when the power supply voltage changes: