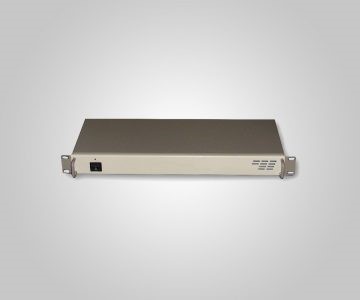 Currently, one of the paradoxes of digital cable networks is the lack of content when there is a technical possibility of broadcasting a large number of TV channels. Channels in digital DVB - C networks can be placed hundreds, and interesting programs for viewers are many times less.

The proposed time shift device allows to correct this situation somewhat, as it provides an opportunity to issue three copies of any channel to the cable network, delayed in time with a given step (Time Shifting). In fact, it is possible to implement the function "TV-Non-Stop" - the channel can be watched at any time from almost anywhere. And if you choose a movie channel, you get the function "Cinema Non-Stop".

Of course, legal issues need to be resolved with content owners. In principle, each subscriber can solve the same functions independently, using receivers with built-in PVR tape recorders. However, the fact that the ads in the "additional" views using the "time shift" can not be removed, and advertising as much as in the main program, no doubt will be beneficial to the broadcaster. And this is a good argument in the negotiations on the legality of such a broadcasting scheme.

The time and number of views by subscribers in this case increases, and without any effort on the part of the broadcaster, whereas in the case of viewing the same channel on the receiver with PVR advertising can be cut.

In our experience, such a service "PVR for nothing" by the cable operator can be positively evaluated by subscribers, especially for film and sports channels.

After the initial setup, which is carried out from the PC and consists in selecting the desired channel from the two ASI input streams and setting the delay duration, the device works automatically, autonomously and does not require constant communication with the PC. The absence of a" time shift " of computer operating systems such as Windows, MacOs, Linux, etc. dramatically increases the reliability of the system. The device works as long as it is "not touched".

Two ASI signals, for example from two satellite receivers with ASI outputs, are fed to the two inputs of the device and arrive at the channel selection switch, which is fed to the recording – playback device with memory on the Flash card.

The control system provides a three-time reading of the stream with the desired delay and already 3 ASI streams are fed to the Remultiplexer, where it is added to the selected one and fed in the total ASI stream to two equal outputs of the device. Thus, the output ASI stream contains FOUR identical time-shifted programs.

The maximum delay time of the channel playback is determined by the maximum speed of the program stream and the memory capacity of the flash card. Since program streams are not always transmitted at a constant rate, this is measured and taken into account when writing to a flash card, with approximately one and a half margin to eliminate the possibility of overload.

With a minimum input stream of 6 Mbit / s and a flash card capacity of 16GB, the time shift will be more than 3 hours.

Using a 32GB card can provide a time shift of more than 6 hours, with an input stream of 6 Mbit / s.